“Vasco da Gama’s ‘landing party had assumed that Hindu temples were Christian churches, they had misconstrued the Brahmins’ invocation of a local deity as veneration of the Virgin Mary and they had decided the Hindu figures on the temple walls were outlandish Christian saints.’ True, ‘the temples were also crammed with animal gods and sacred phalluses,’ but these surely reflected exotic local Christian practices. What mattered to the Portuguese was that these long-lost Indian Christians permitted images in their ‘churches.’ Thus, whatever their idiosyncrasies, they could not be Muslims. The Portuguese joined in the chants and invocations with gusto. When the Hindu priests chanted ‘Krishna,’ the Portuguese heard it as ‘Christ.'” – Eric Ormsby 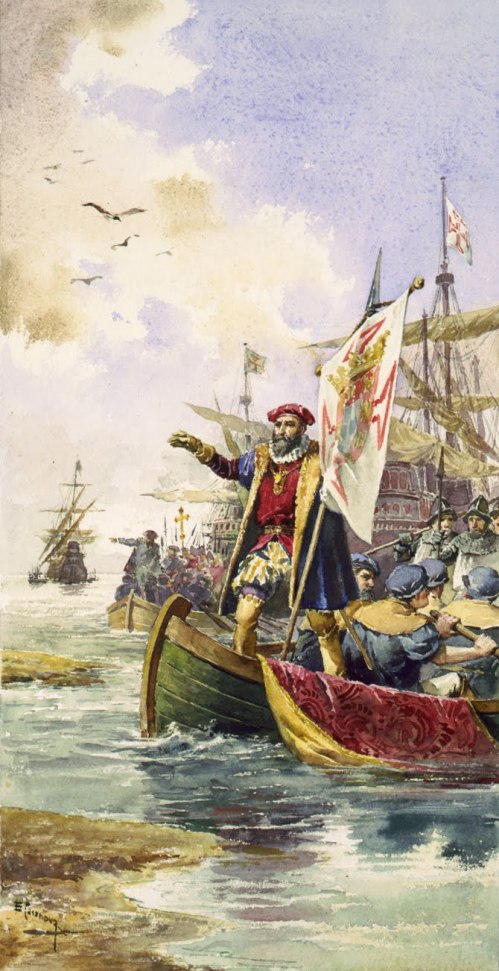 The Portuguese navigator Vasco da Gama set sail from Belém, a village at the mouth of the Tagus River now part of greater Lisbon, on July 8, 1497. An obscure but well-­connected courtier, he had been chosen, much to everyone’s surprise, by King Manuel I to head the ambitious expedition to chart a new route to India. The king was not moved chiefly by a desire for plunder. He possessed a visionary cast of mind bordering on derangement; he saw himself spearheading a holy war to topple Islam, recover Jerusalem from “the infidels” and establish himself as the “King of Jerusalem.”

Da Gama shared these dreams, but like his hard-bitten crew, rogues or criminals to a man, he coveted the fabled riches of the East—not only gold and gems but spices, then the most precious of commodities. On this voyage, as on his two later ones, he proved a brilliant navigator and commander. But where courage could not bring him through violent storms, contrary seas and the machinations of hostile rulers, luck came to his rescue. He sailed blindly, virtually by instinct, without maps, charts or reliable pilots, into unknown oceans.

As Nigel Cliff, a historian and journalist, demonstrates in his lively and ambitious Holy War, da Gama was abetted as much by ignorance as by skill and daring. To discover the sea route to India, he deliberately set his course in a different direction from Columbus, his great seafaring rival. Instead of heading west, da Gama went south. His ships inched their way down the African coast, voyaging thousands of miles farther than any previous explorer. After months of sailing, he rounded the Cape of Good Hope, the first European to do so. From there, creeping up the east coast of Africa, he embarked on the uncharted vastness of the Indian Ocean. Uncharted, that is, by European navigators. For at the time, the Indian Ocean was criss-crossed by Muslim vessels, and it was Muslim merchants, backed up by powerful local rulers, who controlled the trade routes and had done so for centuries. Da Gama sought to break this maritime dominance; even stronger was his ambition to discover the Christians of India and their “long-lost Christian king,” the legendary Prester John, and by forging an alliance with them, to unite Christianity and destroy Islam.

The ambition was not entirely fanciful; there were Christian communities in India, founded according to legend by St. Thomas the Apostle. Da Gama couldn’t tell an Indian Christian from a cassowary, but on this occasion, ignorance was truly bliss. When his ships finally moored at Calicut, near the southern tip of the subcontinent, he and his crew rejoiced to learn that there were indeed many Christians long settled there. As Cliff recounts, the “landing party had assumed that Hindu temples were Christian churches, they had misconstrued the Brahmins’ invocation of a local deity as veneration of the Virgin Mary and they had decided the Hindu figures on the temple walls were outlandish Christian saints.” True, “the temples were also crammed with animal gods and sacred phalluses,” but these surely reflected exotic local Christian practices. What mattered to the Portuguese was that these long-lost Indian Christians permitted images in their “churches.” Thus, whatever their idiosyncrasies, they could not be Muslims. The Portuguese joined in the chants and invocations with gusto. When the Hindu priests chanted “Krishna,” the Portuguese heard it as “Christ.”

Such farcical episodes recur throughout Cliff’s account and add unexpected levity to what is otherwise a dismal record of greed, savagery and fanaticism, especially—but not exclusively—on the part of the European explorers. The Portuguese didn’t know that Hinduism, let alone Buddhism or Jainism, existed. For them, the world was starkly divided between Christianity and Islam. They knew about Jews, of course; they’d been steadily persecuting them with renewed vigour in the 1490s by forced conversion, expulsion and massacre, but to them, Judaism was merely a forerunner of Christianity, not a faith in its own right.

Cliff’s narrative covers a huge span of time. For once the term “epic” seems an understatement. Da Gama’s exploits alone demand such terms. His maiden voyage took two years and traversed an extraordinary 24,000 miles, all this in leaky wooden vessels battered by storms and riddled with scurvy, and it was only the first of his three pioneering voyages that together established little Portugal as a world power.

To provide the widest possible context, Cliff begins with the Prophet Muhammad and the rise of Islam in the early seventh century and concludes with the siege of Vienna in 1529 and the subsequent rise of Dutch maritime expansion. His account of early Islamic history is brisk and factual, but it has a somewhat potted feel, as does his chapter on the crusades, for all the horrific detail he provides. This is, after all, well-trodden turf. When he finally comes to Portugal and its succession of zealous, sinister and quite dotty monarchs, he is in his element, and his book really takes off. He has a novelist’s gift for depicting character. From the fabled Henry the Navigator who, despite his appellation, “never set foot on an ocean-going ship,” to Vasco da Gama himself, at once steely and quixotic, to formidable figures like Magellan and the brutal Afonso de Albuquerque, who terrorized his victims by threatening to build a fort out of their bones and nail their ears to the door, he brings 16th-­century Portugal in all its splendor and squalor pungently to life.

Cliff is good too at such mundane but intricate matters as shipbuilding, royal protocols and the hazards of trade, all of which he documents by well-chosen citations from travel accounts, official papers and personal correspondence. Rather surprisingly, however, he fails to bring the great 16th-century Portuguese poet Luís de Camões into his account (though he’s mentioned in the very full bibliography), even though Camões participated in later Portuguese expeditions and wrote his Virgilian-style epic The Lusiads in praise of da Gama.

While Cliff spins his tale under the aegis of “holy war” and in his subtitle invokes Samuel P. Huntington’s well-worn “clash of civilizations,” on the evidence of his own narrative this framework seems more than a little creaky. Though there was longstanding mutual detestation between Christians and Muslims, the real antagonism seems to have been mercantile. There was no “clash of civilizations” to speak of. The Portuguese gazed in covetous admiration at the trappings of the Muslim courts they visited, and Muslims showed no interest whatsoever in European culture (which they considered pitifully inferior to their own). When they clashed, they did so over lucrative trade routes and territorial hegemony; each was quite proudly ignorant of the other’s creed.

Cliff struggles to find relevance to present-day events, but his attempts are unconvincing. He notes, for example, that in 2006, Ayman al-Zawahri, now the head of Al Qaeda, called for the liberation of Ceuta—a North African city besieged by King John of Portugal in 1415—from the Spanish Christians who now control it. Nevertheless, the real clash today is not between Christianity and Islam, nor between opposing civilizations, but between our own resolutely secular and consumerist culture and a rigid and absolutist mindset outraged by the prosperity Western “infidels” enjoy. That, however, is another epic, yet to be written. The New York Times, New York, 9 Sept. 2011 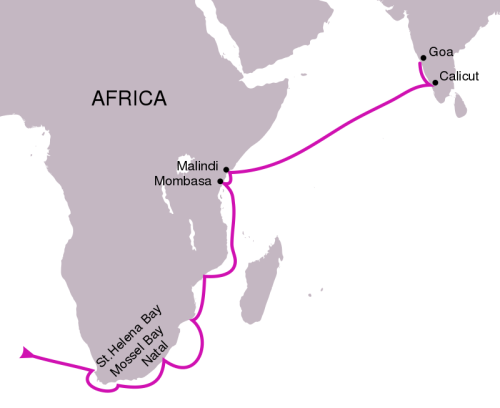