Posted on March 31, 2011 | Comments Off on Blasphemous evangelical distortions – B. R. Haran

“It must be noted that in most of the schools run by the various Christian denominations, Hindu students—who obviously are more in number—are not allowed to sport tilaks on their forehead and girl students are not allowed to have flowers on their heads. Last year a boy was reprimanded and sent out by the management of a Christian school in Chennai city for having applied mehendi in his palms. … In another school in Dindigul, some boys, who were fasting for Sabarimala pilgrimage, were allowed to write their examinations only after having a haircut and removing their tulasi malas. In certain schools Bible is being taught and the Hindu students are forced to attend such classes. The parent community is also aware of these kinds of tortures undergone by their wards, but they prefer to keep quiet in the fear that their wards’ education would be affected.” – B.R. Haran

A Tamil weekly magazine (14 November 2008) has reported the following in its latest issue:

“On Friday 24 October, the devotees of the world-famous Sri Kapalishwarar Temple, Mylapore, Chennai were literally shocked when they were given five booklets each containing defamatory write-ups about Hinduism, Vedas, Vedic heritage, Hindu Shastras, Hindu culture & tradition, Sabarimala Ayyappan and denigrating articles on Sage Thirumoolar, Nayanmars and others, by a bunch of mean-minded Christian evangelists just in front of the temple entrance! For example, in the book titled Light in Darkness, it is written that, the word ‘sadhaa’ in the verse ‘Sadhaa Shivaaya’ means ‘forever’ and there is only one God, who blesses and takes care of this world forever, and he is ‘Jesus’ and the verse ‘Sadhaa Shivaaya’ denotes only him! All the five books are said to have contained more defamatory stories about Hindu Gods and religious gurus. Many people have called up this magazine and sent mails to it giving complete details about what happened in front of the temple that day.”

This outrageous incident has brought out the following facts:

The evangelists have made bold to distribute blasphemous literatures and conduct a hate-campaign against Hinduism, that too in front of a very famous historic temple.

The minority appeasement policies of a “minority” government, which openly said that it is committed to the welfare of minorities, and its anti-majority stand have emboldened these evangelists to indulge in this kind of illegal activity.

The policemen who have been posted near the temple for security—Mylapore temple is under terror threat—have turned a blind eye to this venomous act, probably due to fear motivation from the “minority” government or money motivation from the evangelists.

The Hindus have just exposed their dhimmitude by remaining passive without acting against those evangelists. Sadly, not even one devotee has exhibited the courage to lodge a police complaint against them. The traders near the temple have not bothered to drive away those Christian rapscallions. Certainly the number of devotees must have easily outnumbered those evangelists and they must have caught them with their collars and taken them to the Mylapore police station. Instead of doing all this, some people have written to this particular weekly magazine.

Similarly, in Coimbatore, on 24 September, five staff of Chennai-based East Coast Christian Matriculation School have been arrested by the police for distributing blasphemous literatures propagating Christianity and degrading Hindu Gods and engaging in evangelisation. The police action has been prompted by the complaint given by the local people belonging to BJP and Hindu Makkal Katchi, who caught those evangelists and took them to the nearby police station. Ironically those evangelists have asked the students (most of them are Hindus) to distribute those pamphlets and the innocent students have obeyed the order out of fear. This has been done while taking the students on an excursion (study tour) to Ooty. If this is the way study tours are conducted by a Christian school, one can imagine the standard of education imparted by it.

In this context, it must be noted that in most of the schools run by the various Christian denominations, Hindu students (who obviously are more in number) are not allowed to sport tilaks on their forehead and girl students are not allowed to have flowers on their heads. Last year a boy was reprimanded and sent out by the management of a Christian school in Chennai city for having applied mehendi in his palms. His parents were made to run from pillar to post to reinstate him. In another school in Dindigul, some boys, who were fasting for Sabarimala pilgrimage, were allowed to write their examinations only after having a haircut and removing their tulasi malas. In certain schools Bible is being taught and the Hindu students are forced to attend such classes. The parent community is also aware of these kinds of tortures undergone by their wards, but they prefer to keep quiet in the fear that their wards’ education would be affected.

Recently in a church in Kakkan Nagar, in the Ambedkar slum dwellings of Adambakkam, a Chennai suburb, the pastor, during morning prayers, had openly ridiculed the practice of abhishekam of Amman deities saying that “they are nude and naked worships performed with an erotic motive.” As the pastor was addressing a group of “converts”, his blasphemous speech was heard by the slum dwellers through loud speakers. A Hindu woman, who was drawing drinking water from a nearby municipal water-pump, got outraged by the blasphemous speech, threw out the water from her vessel and filled it with gutter from the nearby ditch and threw it inside the Church. Only then the Hindu men realised the seriousness of the issue and reportedly damaged the window panes of the church. The pastor lodged a police complaint and the police promptly booked those Hindus, who damaged the window panes, and the pastor, who was the real culprit as per the law of the land, went scot-free!

These incidents may look like isolated due to the fact that the Hindus rarely exhibit courage to take on those evangelists, but these strategies adopted by the Church and missionaries are a regular phenomenon going on for years in the state. Mariamman and Aiyappan are two deities which attract millions of devotees, particularly the Scheduled Castes, as evidenced by the Sabarimala pilgrimage and Melmaruvathur pilgrimage. Since the SCs are the targeted audience of the evangelists, the churches come out with literatures, pamphlets and books denigrating Goddess Amman and Swami Ayyappan and ridiculing their worship.

An evangelist by name Dr. Deivanayagam has founded an organisation by name Diravida Aanmeega Iyakkam (Movement of Dravidian Spiritualism) to spread the concept of “Thomas Christianity”, in the name of “Aadhi Christhuvam” (Early Christianity). Through this concept, he attempts to project Shaivism and Vishnavism as sub-sects of Christianity. He wrote a book titled Vivliyam (Bible), Thirukkural, Saiva Siddantham—Oppu Ayvu (Comparative Research) and published it in 1985-86 and has been steadfastly campaigning on this concept since then. Very recently, he convened Agila Ulaga Dravida Samaya Maanaadu (International Dravidian Spiritual Conference) under the aegis of Mylapore Diocese, in which the following blasphemous distortions were projected as researched facts:

Aadhi Christhuvam (Early Christianity) was promulgated and established in Tamilnadu by St. Thomas is the original religion of the Tamils.

The “holy trinity” of “Father-Son-Holy-Spirit” is denoted by “Shiva-Muruga-Shakti” and the same is also denoted by “Brahmma-Vishnu-Rudran”.

The “holy trinity” concept has beautified the Indian religions. The “Holy-Spirit-Father” combination can be identified with “Arthanareeswarar” and “Sankaranarayanar” formations.

St. Thomas’s teachings were abounding in Thirukkural and Sage Thiruvalluvar was a disciple of St. Thomas.

Many such blasphemous distortions were presented in the conference. Close on the heels of the conference the inauguration of the Rs 50 crore production of a movie on St. Thomas was also conducted. The chief guest of the inauguration was none other than the Tamilnadu Chief Minister Karunanidhi, who waxed eloquent on the “supposed” history of St. Thomas, despite having excellent knowledge on Thiruvalluvar and Thirukkural. Dr. Deivanayagam has recently released a book titled Thiruneeraa, Siluvaiya? (Sacred Ash? Or the Cross?), in which, he has again brought out blasphemous distortions. A few examples are given below:

The Hindu practice of applying sacred ash on the forehead has actually started from Ash Wednesday the first day of the penance (Lent days). The sacred ash comprises within it all the three stages of death, resurrection and pardon due to the fact that the ash cannot be destroyed, as how the resurrected body cannot be destroyed.

When Vaishnavism got separated from Shaivism, the style of applying sacred ash was changed from horizontal pattern to vertical pattern.

All Shaivite literatures namely Thirumurai, Thevaram, Thiruvasagam and Thirupathigam do not talk about the four Vedas namely Rig, Yajur, Sama and Atharva. Also, as they carry the messages of Christ, the Bible is the only Veda.

All these things go to show that a sustained campaign has been going on for years and the momentum keeps on increasing with foreign aids and local support. The Dravidian political parties, which are bent on alienating the Tamils from the Hindu fold, have been aiding and abetting these anti-Hindu forces and this unholy nexus between them is creating havoc in the society. Though the religious gurus are deeply concerned about the speedy developments in this area of evangelisation and the alarming rate of conversion going on in the state, they feel helpless and fear the Dravidian rulers. So, the onus lies purely on political and social Hindu organisations to take legal action against persons like Deivanayagam and their organisations for destroying the Hindu cultural heritage and religious traditions posing a danger to communal harmony.

Evangelisation has gone beyond the limits of tolerance by abusing the constitutional provisions for freedom of religion and the general public must also be aware of their moral responsibility to act against those who indulge in blasphemy against their religion and the government machineries must also act as per the rule of law. – News Today, 11 November, 2008 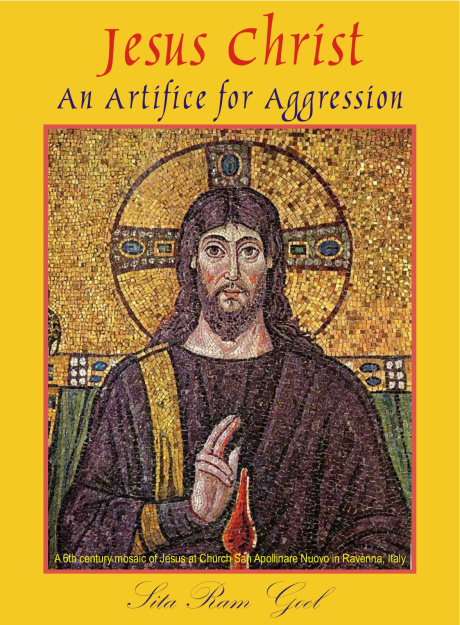